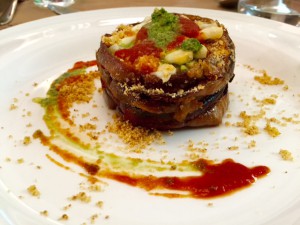 Sicily’s complex history has left its mark in architecture, culture, and customs, but nowhere is it more evident than in the food. Greeks brought grapes and olives and introduced wine making. Romans devoted huge areas of previously forested land to grain production. Arabs brought almonds, apricots, cinnamon, oranges, pistachio, pomegranates, saffron and rice. They introduced many tastes that are now considered typically Sicilian, including the sweet and sour combinations of raisins and pine-nuts with vegetables and fish that form the basis of several common dishes. They also started a long Sicilian love affair with sweets, including gelato and granita, marzipan and candied fruits. 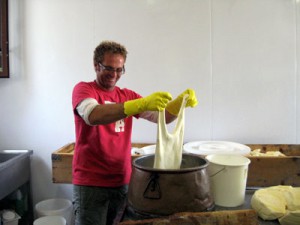 Today, you will eat very well all over Sicily. One characteristic is that you will rarely eat anything that has not been produced within a few miles of where you are sitting. The freshest fish on the coast, the tastiest meats and cheeses in the interior and a huge range of vegetables, fruits and fungi, all with a richness of flavour that you just don’t find at the supermarket!

Sicily is Italy’s second most prominent producer of organic foods, after Sardinia. The island’s year-round supply of fresh vegetables, fruits and herbs are on stunning display in local markets. Tomatoes are omnipresent, though equally adored are eggplants, peppers, capers, olives, figs, mandarin oranges and melons 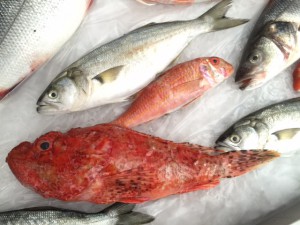 Sicily is renowned for its seafood. Grilled swordfish is popular. Smaller fish is sometimes prepared in a vinegar and sugar sauce. Seppia (cuttlefish) is served in its own black sauce with pasta. Another Sicilian seafood dish made with pasta is finnochio con sarde (fennel with sardines).

Meat is prominent in the central hills, where lamb, kid and pork prevail, though cooks also make good use of veal, poultry and rabbit. Sicilians supposedly invented meatballs, polpetti or polpettoni, which are eaten as a main course with tomato sauce.

Cheeses are dominated by Pecorino Siciliano, also known as tuma, whose pungent flavor is sharpened when laced with peppercorns. When aged and hard, Pecorino is used for grating. Ragusano is a cow’s milk cheese, mellow and delicate when young, though it may also be aged hard and sharp for grating. Caciocavallo and provola or provoletta are also popular. Creamy soft ricotta is used in pasta fillings and pastries, though it may also be salted and dried. 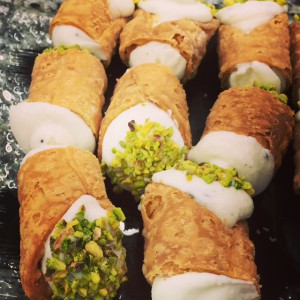 Sicilian desserts are superlative. Cannoli are tubular crusts with creamy ricotta and sugar filling. If they taste a little different from the ones you’ve had outside Italy, that’s because the ricotta here is made from sheep’s milk. Cassata is a rich, sugary cake filled with the same delicious filling. Frutta di Martorana, or pasta reale, are almond marzipan pastries colored and shaped to resemble real fruit. Sicilian gelato is excellent. In fact, it is possible that ice cream was invented in Sicily during Roman times, when a relay of runners would bring snow down from Mount Etna to be flavored and served to wealthy patricians. You’ll find flavors ranging from pistachio and hazelnut (nocciola) to jasmine (gelsomino) to mulberry (gelsi) to strawberry (fragala) and rum (zuppa inglese). Granita is made in summer and flavored with lemons or strawberries.